I was examining the collection this morning, hoping to get inspiration for today's blog post, when I found myself gazing moonily at our corals. How about a quick Friday coral lesson? These are such beautiful animals, and unfortunately some are in a bit of trouble.

First of all, have a look at some of the ones in our collection. These corals look completely different when they're in the ocean. When a coral is alive, it is made up of millions of tiny animals, called polyps. In other words, a live coral is actually a whole colony of these polyps. These polyps secrete calcium carbonate to form the hard white coral that you can see in our collection. In a way, you could think of it as the polyps building their own house. This "house" is left behind after the polyps have died. 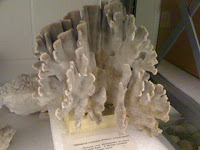 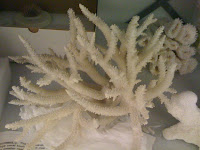 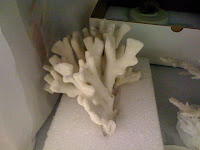 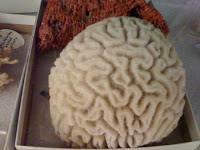 You've probably seen live corals on nature shows, or if you've ever done any snorkeling or scuba diving. They've probably looked something like this: 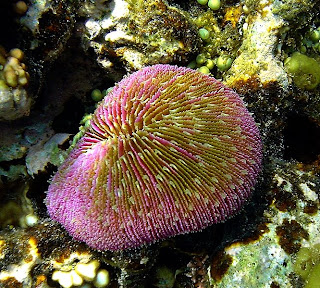 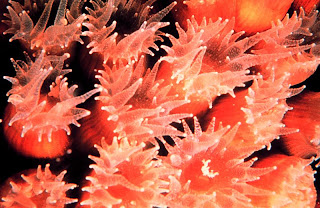 Here is a close-up photo of the polyps themselves. They can catch food in their tiny tentacles, and many of these polyps also have a mutually beneficial relationship with a kind of algae called zooxanthellae. (How do you say that, you ask? It's pronounced zo-zan-thelly.) Zooxanthellae help polyps by providing them with nutrients and consumes the polyps' waste. In return, zooxanthellae get a safe place to live. Often, if the zooxanthellae dies, it will mean that the coral colony will die, too.

Corals are an important part of the ecosystems in the ocean, because they attract many species of fish and invertebrates. Without them, the ocean's diversity would begin to suffer. Unfortunately, these corals are quite sensitive to the stress we are putting on our planet, and they are beginning to die off. Problems such as water pollution and over-fishing as well as changes in the oceans' acidification and temperature all hurt the corals, and many of them are endangered. Conservation methods are underway to help corals, but unfortunately the damage is still being done. If you see any coral during your next beach trip, treat it as you would a painting in a museum - look, but don't touch.

Have a great weekend, everyone!

Getting the Jump on Jumping Spiders

In the Spring of 2013, the Sam Noble Oklahoma Museum of Natural History will be having two invertebrate themed exhibitions: one in insects, the other on artwork of Thomas Shahan. Thomas has gotten a lot of attention for his fantastic photographs, and one of his favorite subjects are jumping spiders. Jumping spiders are some of the cutest spiders, and we have several unique and colorful species found here in Oklahoma. Most of his subjects were actually found in the back field of our museum!
Here is a link to one of my favorite photostreams taken by Thomas on a particularly cute male.

So what exactly are jumping spiders, and why do people take such an interest in them? Well, besides the fact that they are invertebrates and everyone should like spiders, they are one of the largest groups of spiders. They have two distinctive forward-facing eyes that overlap in vision (ALE in figure below), which gives them depth perception and allows them jump to the right location. Try jumping somewhere when you can't see how far away it is!

Our eyes also have this ability to judge distances because of the same forward placement on our faces. Hold one eye open and the other closed, look into the distance, and then open both...see how your "depth" changes? The similarity in position of the spider eyes to our eyes is maybe why many of us might find them "cute". Humans tend to like faces that look like ours with big eyes (think kitten pictures, smiley faces, etc.). All jumping spiders are part of the family Salticidae, which derives from the Latin "salto", or to dance. Many male spiders in this group have elaborate courtship dances, so the name fits! One of the most interesting cases of dancing with males are the peacock jumping spiders. These spiders are from Australia, and the males have multi-colored flaps on the sides of their abdomens that they are able to raise up and wave at drab-colored females to get their attention. Males will even wave their legs around and move side to side, dancing the day away.


Another video of peacock jumping spiders doing their dances
When they aren't dancing, most jumping spiders are out on the prowl looking for small insects and other arthropods for food. Like all spiders, jumping spiders are predatory and feed on other animals. But there has recently been one study that has found a plant-eating jumping spider, Bagheera kiplingi from Central America. These spiders actually eat special bits of plant produced on the leaves of acacia plants. They are the only salad-eaters of the spider world!
Overall jumping spiders are a very diverse and interesting group, and there is a lot to learn about them. So next spring come and see Thomas's show, and learn a little bit more of these fascinating spiders that caught his attention too!

Action in the Collection

This past month Laura and I have had several visitors come to our collection to do research. Visiting scientist are very important for our collection because they help verify our information on different species, and we can help them with research by using our specimens. Because each specimen represents a little point in time of Oklahoma's natural history, there are lots of things scientists can use our specimens for in their research. For me personally its been a lot of fun hearing what each scientist is working on.

One of the first scientists to visit was a Master's student who is working on Buprestidae beetles.  She is doing a survey of the different species of beetles found in South-Eastern Oklahoma, so she went through our collection to see which ones were found in the different counties she is interested in. Some of the records were from as far-back as 1931! Other specimens were collected more recently, and it will be interesting to see the differences in early 1900's Oklahoma versus today when the landscape has changed. These beetles are dependent on dead or dying trees for food, so forestry changes in land use make big differences in whether you can find certain beetles or not.

Another visiting scientist this past month is helping our mollusk collection. Dr. Mather has generously donated a large collection of shells that he's collected over the years as a professor at the University of Arts and Sciences of Oklahoma, and he has been helping us identify the species he's collected. Because of his donation, we have likely become one of the best records of Oklahoma mollusks in the state (second to UASO). He's been coming in every Friday to help us label and identify the shells, and our collection has doubled in size!
Not to be out-shined by Buprestidae work, our Elateridae collection has also had some visitor attention. Dr. Paul Johnson of South Dakota came to check out our Click Beetles to see if there are any new species in Oklahoma. Dr. Johnson is one of the world experts on North American Click Beetles, and has done numerous studies of the group. When he was here he helped update many of the names of taxa that haven't been looked at in nearly 60 years, and also found at least 37 new state records of beetles! This means that until he visited our collection and recognized them, those over 30 species of beetles were never recorded as existing in Oklahoma!

Last, but not least, we have had a visitor interested in our Crayfish collection. Our crayfish collection has been used in several studies of Oklahoma crayfish diversity, including contributing information for this website: http://iz.carnegiemnh.org/crayfish/country_pages/state_pages/oklahoma.htm. Several graduate students of the Michi Tobler lab up at Oklahoma State University are also doing work on Crayfish ecology and evolutionary Biology (lab webpage), and one PhD student is using our crayfish collection to measure how the body form changes (morphometrics) depending on the species and their distribution and habitat. Here are some examples of prepared crayfish samples in our collection that I was preparing to loan out to their research.
So that's whats been happening here behind the scenes at the SNOMNH, and how our collection of Recent Invertebrates has been contributing to biology research of Oklahoma! Come and visit yourself and see!
Posted by Miridae at 8:37 AM 1 comment:

The battle of the sexes in Coridromius

Before you read too far into this blog, I should first mention that this entry is going to talk about traumatic insemination. This complicated-sounding word is a form of reproduction for a few groups of animals, and if you'd prefer not to read or learn about sex in some unique bugs then this is a good point to stop reading.
However, if you do choose to read on, there is a neat story that is being developed by a colleague of mine Dr. Nik Tatarnic about the secret sex lives of Coridromius, a genus of plant bugs that practices traumatic insemination.
Traumatic insemination (TI) is a process where the male of an animal species injects sperm into the female outside of the "normal" structures associated with reproduction. Most animals have designated structures to send and receive sperm that co-evolve together. In the case of TI, the male "hijacks" the system by inserting his sperm in a location that hasn't co-evolved to receive it. This can cause many problems for the female: it causes physical damage because the males literally pierce their outer walls like hypodermic needles, and inject the sperm where it wasn't necessarily meant to go. This is why its considered traumatic. Females can get infections at the sites where the male injects his sperm, and the sperm can go to tissues that aren't meant to have it.
One of the most common cited and studied cases of TI is with bed-bugs, or Cimicidae. The males have literally evolved hypodermic needle-like structures to inject the body cavities of females with sperm. The sperm then are absorbed into her body and then pass through her blood to fertilize her eggs. The females in the case of bed-bugs co-evolved with the males to re-route their reproductive system and accept the damage.
However, Dr. Tatarnic has found a genus of bugs in the distantly related family Miridae that also practice TI. And what is odd about these bugs is that both the males and females have been rapidly evolving different structures to compete against each other, and the females "fight back"; a true war of the sexes. The first unusual thing he found about Coridromius is that even though most males had evolved a hypodermic-needle-like structures like the bed bugs to inject sperm into the females [upper right square in figure below], a few had also evolved unusual-shaped structures that take the form of a "screw" at the end [lower left square].

The elaboration of the structures are thought to possibly help protect the females from the damage the males were making, and so there was evolutionary pressure to develop protective structures. These structures, or paragenitalia, were evolving at a rapid rate as well [right-hand images]. This is done by either blocking the area that males would go, or at least diverting the attack to an area that can control the damage, like a hardened pocket on the side of their bodies [dark tube-like areas on right-hand side].
Dr. Tatarnic continues to work with these bugs, and has found many more species of Coridromius with even more unusual structures. However, why and how traumatic insemination involved in the first place for these bugs remains to be seen. May the battle continue!
Posted by Miridae at 9:36 AM 1 comment: